Thank You for clicking on my page
her faces faces are everywhere faces and i have T.I.A. total information awareness all sounds places breaths words all known at all times
1.


09-25(2021) FBI Official organ communication < -- FBI Commmunication(LINK) from FBI cecret headquarters (Jackson MS).First time FBI really broken silence but they moved the dates.It's not fair... police agents deluge
They are TRYING(TRYING) to pull it over on you you will not be deceived by the fbi communication corruption if you ignore it the document is not true.The document is true because the police are corrupt...It is not true because it is falsehood,it doesnt account for creator God ect and is so broken.The document is broken it is like a seal that has been broken broken broken
Anyway FBI is FEMA organization:God does not need a GOVTcontingency plan FBI slugs have known about this for decades they do not do anything about FEMA concentration camps etc and work with Fairview law enforcement almost over 1 year before they realize the problem,Intelligence community wrapped up in own swamp is what it is....Cant escape the fbi secret eternal embrace just have to run.So the police are in on it too...They know what their doing


08-07 I set up outsidehouse Cameras to stop SSN thief CIS slave trader gang stalking org's harassment efforts against witness without protective custodyto a serious crime (with bodily harm), suddenly "CIA Weasels" have stopped their efforts it seems..
Wonder if FEMA agents aware this concentrated attack on me/my freedoms is a new Katrina!!
Soon the gang stalking enablers(CIA, FEMA, CIS, US Intelligence community, County officials etc)will be made aware of their crimes in the public and the public will have the chance to decide if they are Good or Evil (would assume evil)
The Monopolization of perception(A great ally and friend to the cause has put together a great website ("link")with information about gangstalking terrorism perpetrated against US citizens on national soil!!)
In factI am not afraid of the US government or its attempts to destroy me, local govt's etc.They are smaller, weaker institutions than they believe...I know what i saw, those images will not go away from MY mind.No attempt by federal state county authorities will reduce thiss.
In fact governments are setting up their CHILDREN to live in this gang-stalking society where murder and kidnapping are not punished but even rewarded by CIA inner circle attackers.They will have to answer themselves,to these crimes.

08-05 Continued proof that CIA mind stalkers have continued attempts to destroy my psychology through organized gang-stalking notice these cars (trucks etc)that were not there the day before (two pics): 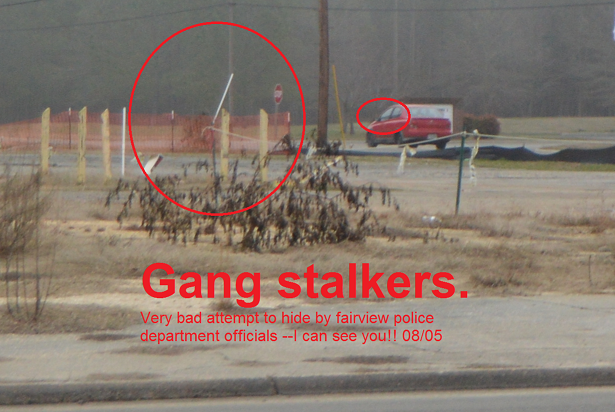 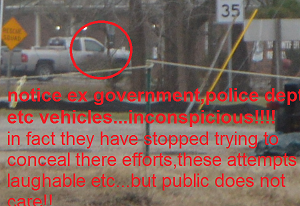 For the last 16 Years i have been subject to a gang-stalking organized terrorism and psychic torture network which aims to ruin my life and cause me to suicide over what i have seen, But i am not this week as such as a person. Related topic: My friend has been TORTURED by the government,with his family since 2019
Since September 2019 my family has been subject to Aural Torture and other Cruel and Unusual Punishments that violate rights of a citizen under the United States Constitution. I have reason to believe that members of the Fairview County Sheriffs Department are in on the cyberstalking, the attacks etc

In november 2019 I was stopped on the way home from work by a member of the Fairview County Sheriffs, who claimed I was intoxicated and "belligerent",as a further tactic to silence me and stop me from speaking out about this crime (I will not be silenced by covert government or police department tactics criminal deeds and misconduct as an American citizen I have the right to speak)
On twitter.com i was repeatedly 'Direct Messaged' by "egg accounts" to silence me, when I started to open up and go to the public to talk about my horrifying experience being Gang Stalked by government federal and state authorities as well as local officers and plainclothes investigators of the Fairview County sheriffs department to find me guilty for a crime I did not commit under contempt of the court of Fairview County where I lived at the time, I have now moved east but it is still a huge problem

it is my sivic duty to know the locations,addresses phone numbers of the people who are FOLLOWING ME AND WISH TO DESTROY ME

Thank You for clicking on my page.

Behind the generator on the left side of the room and under neath the sink windows and doors. Welcome to my page. On my page can find sigils, embassy notifications vaccine